Far too often we avert our eyes and ears from unpleasant history. Claim it long gone or relegate it to distant lands is much more palatable than the more often reality we ought to face, namely that we all share it. “It happened in the past”, is something many of us are likely to have heard, often followed by “why does it matter, let’s move on.” Unfortunately, that is not an easy task. History cannot be relegated to a singular file that can be stored away, forgotten and irrelevant. It is the foundation upon which our society continues to develop and therefore we must acknowledge it in its entirety if we hope to make any meaningful changes.

The Haarfarbentafel, or the hair colour gauge, has an innocuous sounding name which belies its sordid history. The first question which needs to be answered to form a baseline for any future discussion would be to explain what the Haarfarbentafel is, how it was used and how it pertains to race typologies and the furthering of eugenic ideologies. So how is this object related to a history of eugenics and the perpetuation of race hierarchies when, on the face of it, it is merely a box containing different coloured hair samples? The answer lies in the reasoning for its creation and implementation in anthropometrics. Throughout the 19th and 20th century, various gauges were in use to determine skin, eye and hair colour, however, they were often criticised for their unreliability as their colours would fade and the language used to describe them would differ from person to person (Maxwell et al. 2020, pp. 17-19).

This is the point at which Eugen Fischer enters our narrative, as he focused on creating a standardised hair gauge that could be used by anyone without the need to rely on personal judgment for description in a bid to make the classification of human traits more “scientific” (Maxwell et al. 2020, pp. 18-19). His gauge has 30 different hair colours and textures, all numbered to avoid the need for further descriptives. The Haarfarbentafel and other instruments such as Martin’s Augenfarbentafel and von Luschan’s Hautfarbentafel were used to determine differences between people of different races which allowed those like Galton to determine what were deemed by him as “desirable” traits (Kenna, 1964, p. 87; Pickens, 1968, pp. 24-25). In this situation “desirable” and “whiteness” is one and the same. Therefore, people whose traits were deemed “undesirable” were not encouraged to have children (Maxwell et al. 2020, pp. 18-19). 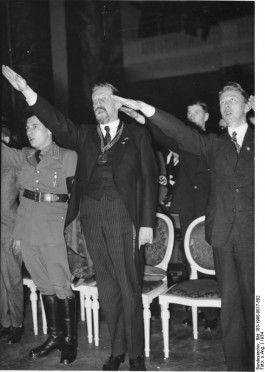 Eugen Fischer at a rally at the University of Berlin. 1934. Wikimedia commons

This, I think, should be horrific enough if it was the extent of the Haarfarbentafel use and implementation. However, Fischer conducted extensive work using it to determine the inheritance of traits and what the result of “mixing blood” would have, especially on European races (Maxwell et al. 2020, pp. 27-35). His conclusions causing nothing but revulsion as I read them, for he categorically believed that some races were inferior to others, and anyone, Europeans, who mixed blood with those deemed inferior to them were “mad” and would lead to the “pollution” of their blood (Olusoga and Erichsen, 2010, pp. 250, 298). These ideas should make a large majority of people reading this appalled, and relegate Fischer and his like-minded associates to the realm of monsters. But doing so would be a mistake, as monsters are a creation of fiction and Fischer and his ideals were all too real. 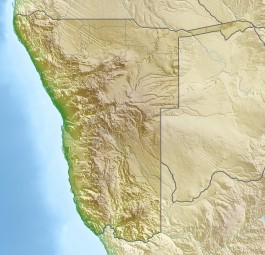 A lot of his early work centered around the region now known as Namibia, where he used his hair gauge to try and determine the “whiteness” of the Baster people living there separating them into categories of “good”, “middle” and “Hott” (Maxwell et al. 2020, p. 31). Also, at his behest the remains of the slaughtered Herero-Nama people of Namibia, in what is now recognised as the first genocide of the 20th century, were transported to Germany for study to further his research into race typologies (Anstett and Dreyfus, 2016, p. 6). His work in this region had a domino effect as his publications led him to take an active role in the Rheinlandbastards case, where, in 1937, 400 children deemed of “mixed race” were detained and sterilized against their will (Maxwell et al. 2020, p.36).

All of this is shared not merely to cause outrage, but to show how a simple hair colour gauge cannot be viewed as a harmless creation. Not when its inventor and users saw fit to use it to propel eugenic ideas based on ever growing complex race typologies. Users which did not stop at Fischer or Germany. His ideas were echoed in America by people like Charles Davenport (Davenport, 1911, p. 219). In the UK we had those like Francis Galton, who coined the term eugenics and who left behind his collection, along with a stipend of money for UCL to use in the creation of a department dedicated to the study of eugenics which he hoped his protégé Karl Pearson would spearhead (Maxwell et al. 2020, p. 23). 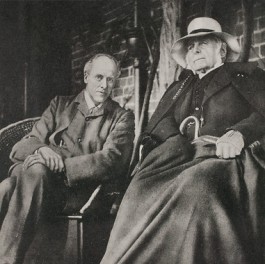 I end this object essay with some questions for you, the reader. Do you think these ideologies are a relic of the past? People might not go around with a tin box to see your hair type, or an eye colour chart to determine the exact shade of blue of your eyes, but do we not still carry the legacy of these thoughts? Do we not, to this day, ascribe the word “beautiful” to people with a certain hair type? To those who look in a certain way? 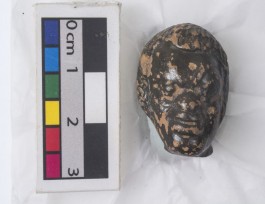 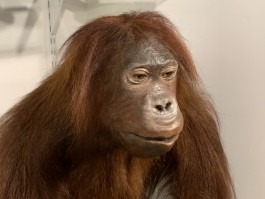